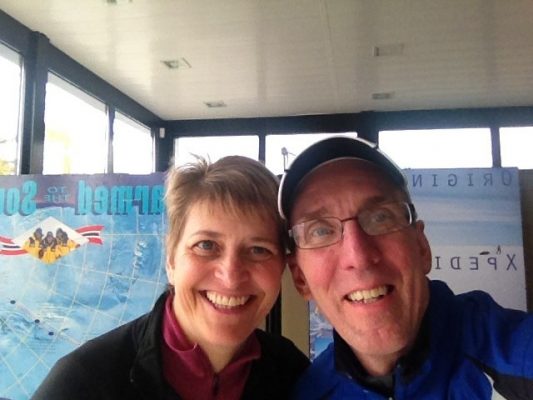 Preparations continue with salami and cheese chopping. Weather delays give the team more time in Punta Arenas to rest up. Flight to Antarctica pushed up a day or two.

Hello this is Chris giving a call back in from Punta Arenas, Chile. We are still doing some final preparations for our expedition to Antarctica. Today we took a break from that warehouse and decided we would spend some time in our hotel cutting up 16 pounds of salami, 26 pounds of cheese into little cubes and putting them into a little baggies and making them ready to go for 45 days of food for Marty and I.

Then we spent another part of the day doing a bit of searching for some different items that we still needed, search for some batteries, some decent lighters because you can’t carry those on an airplane. So we had to find those.

We had to hunt down a box to store our sausage and cheese so that it could be put into a deep freezer and that would be ready to go on to the plane.

And we laminated this a big map of the whole route so that we could have that with us.

And we ate at this awesome restaurant. We had some nice fattening, Fettucini Alfredo.

And, interestingly, we got to get all the gear weighed and the final weight of our gear for the expedition. Looks like our total that we will be carrying along with our fuel when we get to Antarctica will be right around 220 pounds each. So that’s about on track with what we thought it would be.

We did have a pre flight meeting today and we’ve learned that our scheduled flight, (to the ALE landing strip at Union Glacier, Antarctica), for Saturday looks like that’s not going to be happening for us. There’s been some bad weather earlier this season. And so the first flight, out which would probably be on Sunday is going to carry fuel, barrels of fuel, to help refuel some machinery and different things that are pretty critical to have in Antarctica. So after that then we will be on the next flight, hopefully Monday at the earliest, maybe Tuesday or Wednesday, so we’ve got a few extra days here.

And we’re just looking at that as an opportunity to get a little more rested up and sleep in a warm bed, have some warm meals a few more days of that to savor before we get to the really cold Antarctic weather. We are really looking forward to getting skiing and getting going there but we’re just going to have to be patient until we can get on a plane and get there. So that’s it for today and we will keep you posted on anything new and exciting that happens tomorrow. Okay. Signing off, bye bye.

Listen to the audio version of the Fagan’s dispatch from Punta Arenas, Chile:

3 below zero Antarctica Expedition Chris Fagan Marty Fagan South Pole South Pole Expedition three below zero Travel in Antarctica
26 Pounds of Cheese2013-11-212019-05-23https://chrisfagan.net/wp-content/uploads/2019/05/faganblue1.pngChris Faganhttps://chrisfagan.net/wp-content/uploads/2013/11/photo-e1385101982445.jpg200px200px
About
Chris Fagan
My adventurous spirit shines through in my work as an author, speaker and trainer. My husband and I became the first American married couple to ski without guide, resupply or other assistance to the South Pole–and became Guinness World Record holders. Read the full account in The Expedition: Two Parents Risk Life and Family in an Extraordinary Quest to the South Pole. When not outdoors, you’ll find me leading creative discussions in corporate conference rooms, training people in creative thinking processes, or inspiring audiences with my storytelling. Learn more at www.chrisfagan.net.
Showing 3 comments 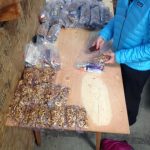 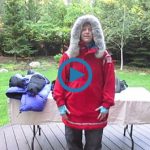