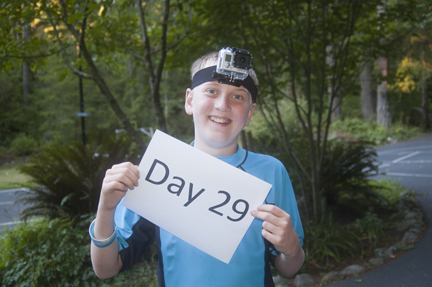 Translation from voicemail: Well hello, Team 3belowzero, Day 29. Today’s story is all about sastrugi and low visibility. As you, as you, if you’ve been listening, sastrugi are these waves of frozen snow. And pretty much all day we were pulling through that stuff and most of the day was low clouds, low visibility. Very, very tough conditions to pull through that with the sastrugi. I think I almost fell over ten plus times because you cannot see the contour and all of a sudden you hit these waves of snow and you are falling over them practically. The photo we attached today shows the sastrugi when there was sun where you can actually see them but when you are pulling through in low visibility it makes it really challenging.

So we planned to go nine hours today but we cut it short at eight hours because we were actually getting concerned that we might hurt ourselves or break a ski or break a ski pole, which would not be a good idea. We worked hard to get our twelve miles today, and we’re hoping for a little bit better conditions tomorrow.

Other news, I though I’d let you know that the last couple days I really enjoyed an audio book called The Art of Hearing Heartbeats. One of the great recommendations by my friend Michelle Conrad. Thank you so much. I really enjoyed that one. Also people have been asking a little bit about food. Thought we’d mention that our favorite, Marty and I agree, our favorite Mountain House meal, actually it’s a  soup, is the clam chowder. It just tastes so homemade and yummy it’s awesome. The other thing, every single day, I think since we started, Marty has wished for another hot chocolate and Starbucks Via so he could have a double mocha instead of a single, in the morning. And that is his single biggest wish of what else he would bring. (Laughing) I’m wishing for more penguin gummies that were given to us by the Mandlekorns.

As far as cravings go pretty much anything that doesn’t require water to make it and that is not mushy and that we can eat while we are sitting at a table instead of on the ground would be awesome. Pizza sounds good, hamburger, french fries, eggs and bacon. The list goes on and on.

So that’s it for today. We wanted to give a big thank you A.L.E., Antarctic Logistics and Expeditions. They are the people who are monitoring us while we are here. They helped us with all the logistics. They have really done a great job and we really appreciate everything they are doing for us as we are out here keeping us safe and well informed of where we are and etc.

3 below zero Antarctica Expedition Chris Fagan Marty Fagan South Pole South Pole Expedition three below zero Travel in Antarctica
Team 3belowzero’s safety concerns cut the day short2013-12-302019-05-23https://chrisfagan.net/wp-content/uploads/2019/05/faganblue1.pngChris Faganhttps://chrisfagan.net/wp-content/uploads/2013/12/Day-29-DSC_2872-small.jpg200px200px
About
Chris Fagan
My adventurous spirit shines through in my work as an author, speaker and trainer. My husband and I became the first American married couple to ski without guide, resupply or other assistance to the South Pole–and became Guinness World Record holders. Read the full account in The Expedition: Two Parents Risk Life and Family in an Extraordinary Quest to the South Pole. When not outdoors, you’ll find me leading creative discussions in corporate conference rooms, training people in creative thinking processes, or inspiring audiences with my storytelling. Learn more at www.chrisfagan.net. 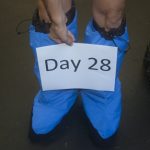 When can you put chocolate chunks in your oatmeal?Antartica News, Follow our Expedition, South Pole Expedition 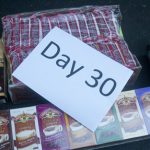