Recent Interview with Go Outside Brazil – Post 2 in Series 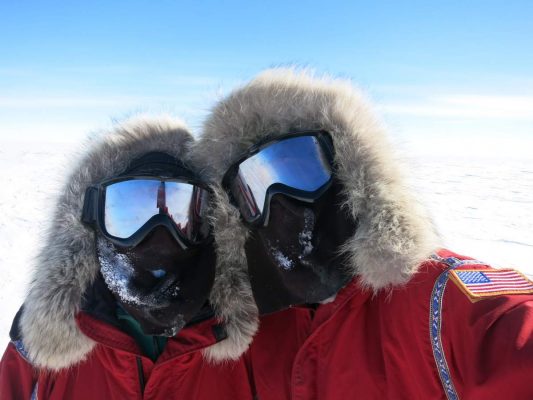 Chris and Marty in Antarctica on a calm day

We were recently interviewed by Go Outside Brazil to be part of an article about couples who do adventures together.  We’re not sure how much of the information that we sent them will make it to the article, so we thought we’d share it here in a series of blog posts.  This is the second in a series of six posts.

Tell me a little about the South Pole expedition. How did the idea appear? What was your physical training? What were the better moments in this challenge?  What was most difficult about the trip?

About three years before departing to Antarctica, my husband Marty walked into the kitchen and nonchalantly asked me, “What do you think about going to the South Pole?”  Thus began our journey to the pole.  We were at a point in our lives where our jobs, family life and fitness level could support a major expedition like the South Pole.  We were attracted to the South Pole because it is still wild and pristine, and relatively unexplored compared to other extreme places in the world.  It’s still unique and magical. And our decades of cold weather climbing and ultrarunning had sharpened our physical endurance and mental toughness, critical skills for a polar journey.

For the first year after getting the idea, we read every polar book that we could find and sought out polar experts from the US and Norway.  There really aren’t any books that tell you how to go on an expedition to the South Pole with no guide or resupply.  I traveled to Ely, Minnesota and Marty went to Spitzbergen, Norway to train with polar guides in cold weather climates.  At home, we supplemented running 40-50 miles a week in the mountains with strength training to bulk up, and pulled two large tires to simulate heavy sleds.  In the last few months before departure, our weekly training schedule included running 4 days, weight lifting 2-3 days and pulling tires for 8-10 hours one day followed by 4-6 hours the next.

Beyond training, figuring out the logistics and acquiring the proper gear and food was a monumental effort.  We both worked full-time jobs and planning became our second job.  We had “to-do” lists that were hundreds of items long.  And we spent a lot of time putting a support network in place to care for our 12-year old son while we were gone.

We arrived in Antarctica well prepared for our journey.  The best moments were the sunny days when we could see for 15 miles in every direction, when goggles weren’t fogged over, and we felt strong and made good miles.  Those were the days we felt lucky to be in such a pristine, wild environment.  And the silence was something to savor.  A very special moment was when we had a satellite phone call with my son’s school while we were in our tent in Antarctica.  The entire school of kids met in their gym and we called in and answered their questions for 40 minutes.  We could feel their love and support over the phone line; we felt so connected to our son and his school.  Another amazing moment was when we were within 100 feet of reaching the pole, it was 50 below (Fahrenheit) that day, and despite the extreme cold, I removed our satellite phone from our sled and called our son so that we, as a family, could all experience the moment of our arrival at the pole together.

We ran into our share of challenges along the way.  Early on we made a slight navigational error that added 5 miles to our journey.  For the first two weeks, Marty had issues with his skis and bindings that caused his ankle to roll out with each step, leaving him exhausted at the end of each day.  He finally solved the problem by wearing his skis on the wrong feet for the rest of the expedition. Also, we thought we’d have things “wired” a few weeks into the journey, but Antarctica seemed to toss a new challenge at us every day.  The relentless wind, white outs and sastrugi (frozen wind blown waves of snow) wore us down to the core.  Around day 38, we were left feeling physically and mentally exhausted.  We had taken one rest day and averaged 9 hours of pulling a day for the entire expedition.  We were losing weight and strength, our pace didn’t quicken as sleds got lighter (as we had hoped), and it was too risky to take another rest day as we had a limited supply of food.  We had originally thought our journey would take around 40 days (we brought 45 days of food), and we stretched our food to last 48 days.

In the end, we made it to the pole and became the first American married couple to complete a full expedition from the coast to the pole without a guide, resupply or other assistance.

3 below zero Antarctica Expedition Chris Fagan Married couple adventure Marty Fagan South Pole South Pole Expedition three below zero Travel in Antarctica
Recent Interview with Go Outside Brazil – Post 2 in Series2014-06-042019-05-23https://chrisfagan.net/wp-content/uploads/2019/05/faganblue1.pngChris Faganhttps://chrisfagan.net/wp-content/uploads/2014/06/two_in_antarctica.jpg200px200px
About
Chris Fagan
My adventurous spirit shines through in my work as an author, speaker and trainer. My husband and I became the first American married couple to ski without guide, resupply or other assistance to the South Pole–and became Guinness World Record holders. Read the full account in The Expedition: Two Parents Risk Life and Family in an Extraordinary Quest to the South Pole. When not outdoors, you’ll find me leading creative discussions in corporate conference rooms, training people in creative thinking processes, or inspiring audiences with my storytelling. Learn more at www.chrisfagan.net. 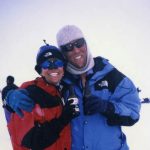 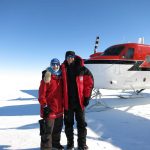