Hard to stand up in the wind. 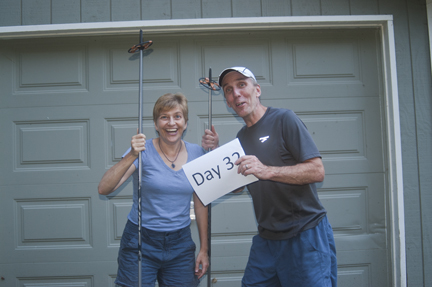 Translation from voicemail: Team 3belowzero, Marty here doing the voice blog tonight and hopefully you can hear me okay because it’s very loud in our tent. You can hear that in the background. We have steady twenty five mile an hour winds gusting over thirty. And we pretty much did about our last four hours in that today. We did a total of six hours today before we finally decided we had to stop. Eked out nine miles and then we had to set up the tent in this wind. Which was difficult to say the least.

Chris and I, what we do to get the tent up in winds like this, the first thing we do when we stop is put on our down jackets and down gloves and make sure we try to get so we’re semi-warm. And then we clip, pull the tent out and clip it to the sled. And then we also take stakes and clip down the back of it, and stake down the back of it. So one person has to be, hold on to it all the time. We get it up. And then we still have to get the tent fly on and one person has to hold it. The other person works on the tent fly. As soon as the tent fly gets on then there’s snow flaps on the tent. Those snow flaps have to be, you have to pile snow on top of those. That’s like one of the most important parts of the whole process that keeps wind from getting under the tent.

We also, what we did was, we parked one of the sleds directly behind the tent. That kind of lets the snow blow around the tent and helps out a little bit. And then once we have it all up one person is dumping snow on the snow flaps, the other person is pulling stuff out of the sleds, dumping it into the tent. That helps hold everything down and once I had everything in the tent Chris finished up with the snow on the snow flaps, she jumps in the tent, and gets, starts getting that organized and I started digging snow up to, blocks of snow to melt. So we can melt water.

So were really crossing our fingers that the wind comes down a little bit. We don’t mind some wind but we pretty much weren’t able to stand up sometimes. Oh, and the wind chill right now, I went out, I have a Kestrel wind meter. I went out and the windchill was negative twenty seven (F). So, needless to say you can’t have any bare skin even for, you know, a brief time would be bad. And thin gloves aren’t good. (Editors note: At minus 40 degrees F skin can freeze almost instantly.) While we were working on the tent we were wearing down mittens, which is difficult at the least.

3 below zero Antarctica Expedition Chris Fagan Marty Fagan South Pole South Pole Expedition three below zero Travel in Antarctica
Hard to stand up in the wind.2014-01-022019-05-23https://chrisfagan.net/wp-content/uploads/2019/05/faganblue1.pngChris Faganhttps://chrisfagan.net/wp-content/uploads/2014/01/Day-32-DSC_2882-small.jpg200px200px
About
Chris Fagan
My adventurous spirit shines through in my work as an author, speaker and trainer. My husband and I became the first American married couple to ski without guide, resupply or other assistance to the South Pole–and became Guinness World Record holders. Read the full account in The Expedition: Two Parents Risk Life and Family in an Extraordinary Quest to the South Pole. When not outdoors, you’ll find me leading creative discussions in corporate conference rooms, training people in creative thinking processes, or inspiring audiences with my storytelling. Learn more at www.chrisfagan.net.
Showing 4 comments 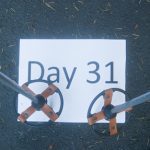 Crux of the expedition in sight.Antartica News, Follow our Expedition, South Pole Expedition 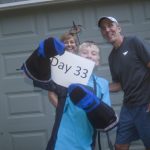